Club stalwart, Rachel Abbot kindly agreed to be guest of honour to present the awards, with Chris Akehurst acting as host as well as quiz master to provide entertainment.

Celebrations included achievements across Cross Country, Park Runs, road running as well as Track and Field where the young green vests had enjoyed one of their best seasons to date having regained the NESS Trophy and placing 10th in the EYAL league.

Members were applauded for their contributions to the successes as well as to those who through their desire and passion represented the Club at numerous open meets as well as regional and national championships.  A handful of Club Records had been broken throughout the year – and in some cases more than once – resulting in some excellent UK rankings.

Thanks, were offered to all club volunteers who had made the season possible.

Sprint Girl: Shanii Mclean who this year became Essex County Schools Intermediate 200m Champion, having snatched the title from the County champion in an exciting battle for the line where just 6 100dths of a second split the pair.  At EYAL meets McLean won a fantastic nine out of fourteen races taking second place at all the others – adding a healthy tally of points for the team as well as consistently lowering her 100m time at each meet from 13.7s to 12.85s and reaching a UK top 100 ranking in the 200m with a best time of 26.6s.

Sprint Boy – Samuel Shippey. As well as being an invaluable team player at both EYAL and SAL meets where he often obliterated the field, Shippey became the 2019 U17 men’s Essex County bronze medallist in 400m, the U17 Eastern Counties 200m Bronze medallist and the Essex County Schools Intermediate boys 400m Champion. He reduced his 400m PB by over two seconds which ensured a UK ranking of 25th place.

Distance Girl:  Milly Presland.   Her favoured event of Cross country with its demands of hills and mud provided Presland with another County Schools vest when she represented team Essex in Leeds at the National Schools Age group championships placing 47th in a field of 341 competitors, which helped the team to a great silver place.  She won all of the NESS races finishing top in her age category. On the track she took on the 1500 Steeplechase where she gained an English Schools qualifying standard of 5:18.14 and 17th in the UK rankings.

Special mention in this category was given to U13 Lyla Belshaw who joined the club after the start of the season and was therefore ineligible for an award.  At her first meet for the club she gained a top UK 50 ranking, this was followed up by two further meets which saw her smash the 1500m record twice reducing her own PB by over 16s.

Field Throw Girl:  Olivia Simon and Josephine Larkins.  In 2019 Simon once again demonstrated her dominance competing U15 Hammer.  Her throws often beating the rest of the field by between 10m and 20m.  She won six out of six EYAL meets as well as two other throws events at each meet. Her year ended just outside of the top 10 UK target of 44m having claimed new Club Records in both 3kg and 4kg categories.   Larkins also achieved an impressive clean sweep as an U17 Hammer specialist at EYAL matches.  At open meets and Championships, she became U17 Women’s Essex County Champion as well as taking Silver at a Southern Inter-counties Championship and became the Eastern Counties Champion. She improved her best throw by 4.88m which propelled her into 11th place in the UK U17 rankings.

Field Throws Boy:  Wyatt Larkins.  At EYAL matches he competed three throws events improving his 3kg Shot from 7.66m to 8.37m and added 5.54m onto his Discus to consistently finish in second place.  At open development meetings he earned a Number 2 UK ranking in the 3kg Hammer with a respectable 39.06m which all time places him 12th in this category.

Field Jump Girl: Zion Ateba.   At each of the meets Ateba was one of the last two girls standing in the U15 High Jump, providing exciting entertainment for spectators.  In June, despite breezy conditions she cleared a new PB height of 1.61m to equal a Club Record that had stood for fifteen years and earned herself a place on Team Suffolk at the prestigious English Schools Championships in Birmingham.

Field Jump Boy: Jakub Walecki.  Competing his maiden season for the club Walecki was surprise but very valuable find.  Winning three out of four league competitions – dropping into second at one – he maintained a relaxed, focused persona and clearly enjoyed the challenge. Having gained the qualifying standard, he entered his first National Age Group Championship unsupported by a coach and finished a respectable eighth.  His season best of 1.80m was just 5cm shy of the Club Record.

This talented multi – eventer opened her season in early May at the Suffolk Schools Championships clocking 14.4s in the 100m, 12.6s in the 75m hurdles and clearing 1.57m in the high jump.  A few days later Zion threw the javelin 15.50m at the EYAL meeting at Ipswich.  At the June EYAL meeting at Chelmsford Zion leapt a personal best 4.74m in the long jump and another PB in the high jump clearing 1.61m to equal the under 15 girls club record set fifteen years ago.  So by 2nd June Zion had completed her five events and set a points score that proved to be uncatchable.  At the August EYAL meeting at Hendon Zion improved her PB in the long jump to 4.81m and in her final competition of the summer increased her long jump PB by a further 7cm. Under the scoring system for this award She earned a fabulous 2632 points

In his first season competing for the Harriers where he competed in four EYAL meetings Oliver came out on top having run over 100m, 300m and 800m and competed in long jump, shot and discus competitions during the season.  He finished the track season with personal bests of 12.6s for the 100m and 41.6s for the 300m.  At the plate final he knocked almost 10 seconds off his 800m time clocking 2m 26.72s.  During the season Oliver jumped 3.76m in the long jump and threw the shot and discus 6.19m and 13.10m respectively to complete his five events. He gained a score of 1,431 points.

U13 Female Impact Athlete:  Hollie Martin-Whymark.  Having shown great determination and commitment in training she was rewarded with significant PB’s in competitions where she reached county and regional finals. Her passion for the sport is tangible and her support for her fellow teammates infectious.

U13 Male Impact Athlete: William Long. He made a valuable contribution to the teams score at EYAL matches as well as ensuring the juniors won the NESS Trophy.  His hard work and commitment bagged him some decent PB’s and a reputation for being a great team player.

U15 Female Impact Athlete: Megan Taylor.  Her versatility as a valuable athlete was put to good use at more than one meet where she was able to stand in for athletes who had been unable to attend – doing so with obvious enjoyment.  She made huge improvement this season taking three seconds off her Hurdles time and adding some half a metre to her Long Jump.

U15 Male Impact Athlete:  Tom Ashley.  Although a natural sprinter, Ashley was often called upon to “take one for the team” in discus and shot put where his pleasant personality and commitment to attendance made him a popular team member.

U17 Female Impact Athlete: Aliyah Soames.  Having endured a few tough years where she came close to leaving the sport 2019 turned out to be a fruitful season. As well as claiming three bronze medals at County and Regional Championships she also broke the Club Record for 500g Javelin three times, gaining a new best distance of 32.75m increasing her PB by 3.5m.

U17 Male Impact Athlete:  Tommy Colsell.  In his first ever track season for Harriers his commitment to attend all the meets was exemplary.  Doubling up over the 800m and 1500m he was even willing to add points by attempting to compete the Discus. However due to a scheduling clash he was refused entry into the circle in his socks – after having to kick his spikes off.  He took on Triple Jump for the team and supported new athletes into the team.  His participation in every NESS race ensured success for Harriers.

Most Improved:  shared between Emily Swan and Harvey Daniels

U15 Swan enjoyed a great season which was testament to the hard work and improved dedication she has shown to her training.  Winter Cross Country races ensured her 2019 track season started fitter and quicker than before.  She consistently reduced her 800 and 1500m times culminating in a fantastic reduction of one minute ten seconds in her preferred 1500m and a great 21s in the 800m, she also improved her High Jump to 1.40m.

Daniels season has shown that specialist training in his main event has rewarded him with a much-improved technique in Pole Vault.   He Pb’d at every meet until at the Plate Final he produced his best set of vaults for the season – on a borrowed pole – where he added an impressive 20cm to his previous best, claiming a new Club Record of 3m and 72nd in the UK rankings.

Best Newcomer: Seam Emeka-Ugwuadu.  A fantastic transferee for the juniors this season turned out to be one of the club’s top scorers earning a huge haul of points across the five meets he competed – earning Man of the Match more often than not.  He is an exciting talent for the Club who shows promise across a range of events.  A silver medal at Essex County Schools Championships in the Long Jump capped off a great season.

Junior Female Athlete of the Year: Olivia Simon.  As well as dominating at EYALs Simon represented the green vests at many other events around the region which earned her a trio of fabulous championship titles:  Essex Schools Junior Hammer Champion, Essex County U15 Hammer Champion, Eastern Counties U15 Hammer Champion. As well as these, she was U15 South of England Bronze medallist and took fourth at a sixteen Counties Inter county championship. Having gained the tough qualifying standard, she was invited to join Team Essex at the prestigious English Schools Athletics Championships at Alexander Stadium in Birmingham where she was placed a creditable 12th out of 21 competitors. She also competed at the English National Age Group Championships in Bedford.  She is the new Record holder for 3kg and 4kg Hammer with best throws of 42.25m and 31.77m.  Her coach, Rob Earle describes her as a developing achiever and looks forward to seeing what 2020 might have in store.  She finishes her year ranked 11th in the UK for U15 Hammer.

His enthusiasm and ambition for athletics is infectious and is a team managers joy – showing competency across a range of four or five different events.  He is determined and yet delightfully naïve and so far, this year made significant achievement on raw talent alone in one of his events.  As well as High Jump, he consistently threw well in the Javelin and Shot and also demonstrated he has good turn over for speed events too.   At the National age group championships, he came a respectable eighth place and finished his year ranked 8th in the UK for U15 boys.  A move to Steve Garnham’s squad could make for an exciting few years ahead.

A raffle raised an impressive £320 for club funds. 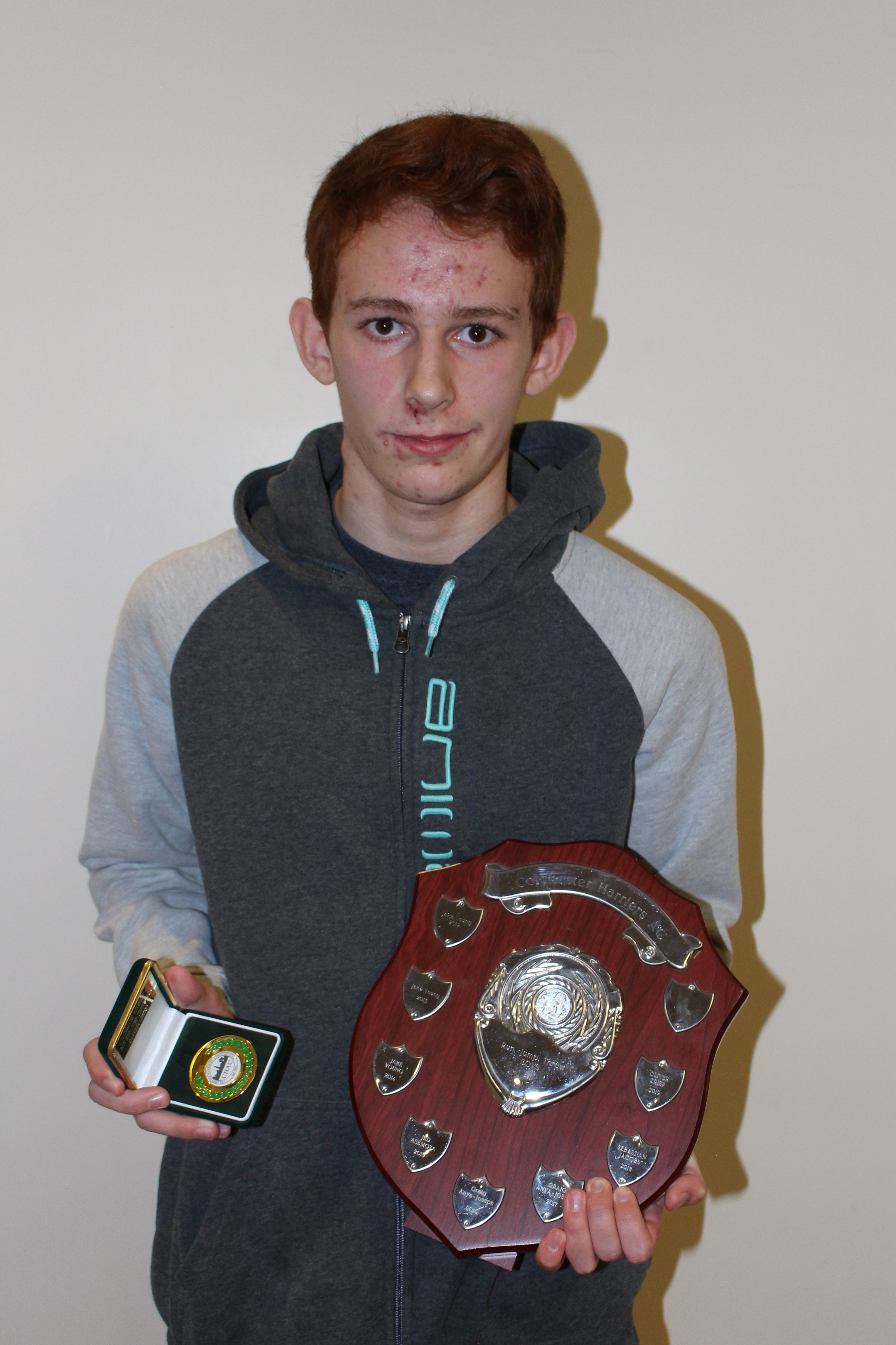 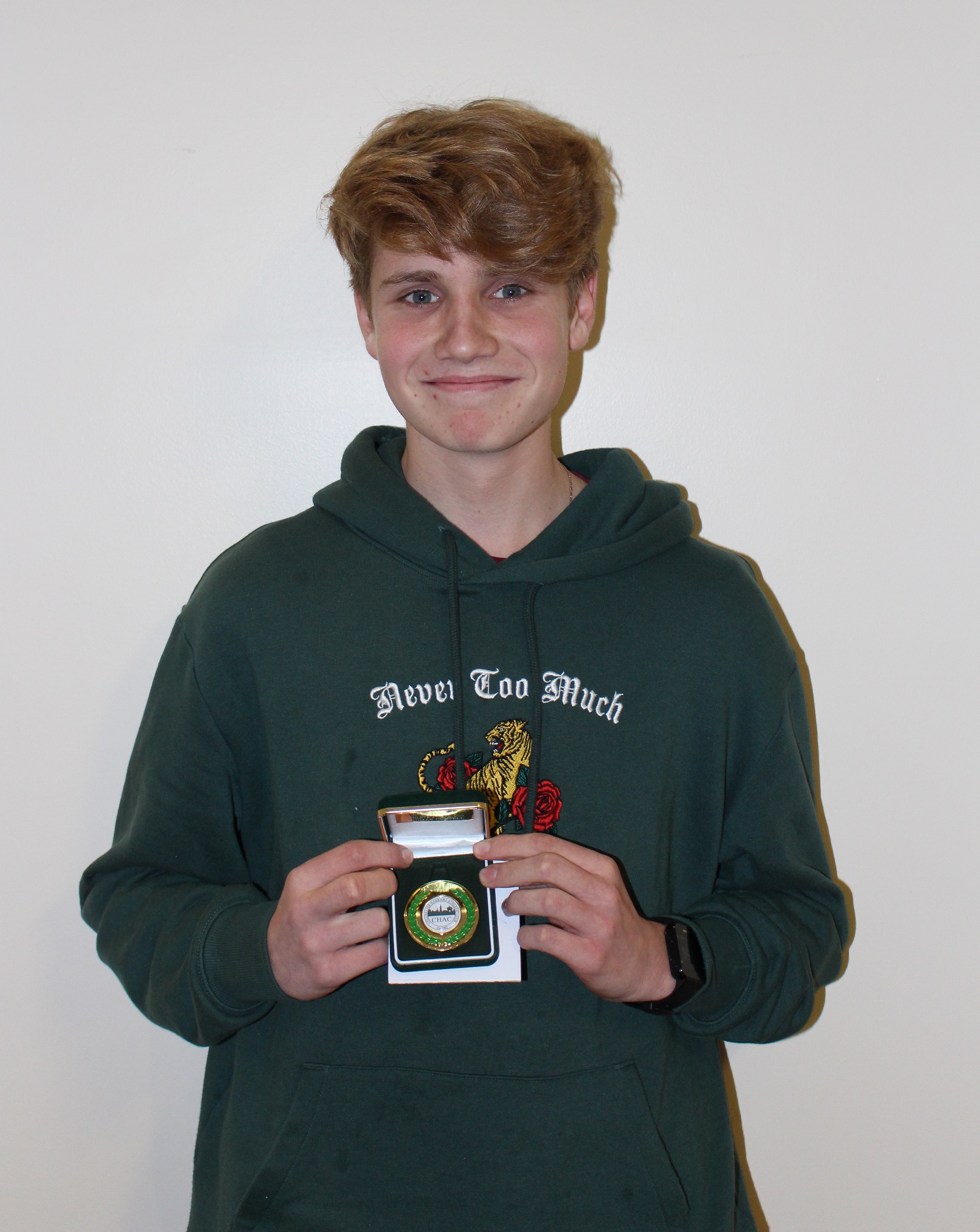